The Exposure of Life

Firstly, the first class of Video Sculpture attracted me above my expectation. I learnt a lot of new stuff and knowledge most of which about new form of art. I have to say that they are useful for my study and career lives. Besides, Video Sculpture makes me interest in it also because it provides me a way to display my idea out of my mind, even out of a simple screen, because it is in the real 3D world, as the Professor Gabe said, “No 3D glasses in this class”.

The first reading is about Tokihiro Sato, a famous Japanese photographer. His specialty is that he is good at using very long exposures. Although I have seen a lot of long exposures photographs before, and I can realize different meanings or feelings from them, for example, some of them are about movement, some of them are about nature, even some of them are about nothing to me. However, Tokihiro Sato’s works are totally different. I can clearly see an exact topic which is about life from his famous works, Photo-Respiration. Although none of these photographs contain a person in it, through the light or the point of light, I can feel that there is a beautiful life in it. I know that he have to use people to move the light in front of the camera, but because of the long exposure, only light left, not people. As a result, what I can feel is not the light moved by human, but the life of the light, and a kind of new life behind the light. Just because there is no human or even animal in the scene, the “magic” spots or streaks give viewers a grant space to imagine. No matter what viewers think, it will be a pure and fresh feeling which is similar as breathing and life.

Besides, various kinds of cameras invented or constructed by Sato make him more special and outstanding. That’s why people would like to think him as a visual artist who is appropriating the medium of photography, not the traditional photographer. In terms of his camera, the multiple pinhole camera is a great trial. After I saw the Brooklyn Bridge he took with that, I was totally shocked. Not only because the method he came up with, but also because of the beautiful art he showed with that. I have ever tried some ways to record the historical construction Brooklyn Bridge, I never got a satisfied method to do that. However, Sato really did it. The 24 photos of different parts and different angles of Brooklyn Bridge combine together to a whole photograph which shows the beauty of the famous bridge in a special but simple way. If we see these 24 photographs separately, we can hardly find any specialty from them. However, if we put them together, an abstract and contort Brooklyn Bridge is showed in front of our eyes. I used contort, not because it changed the basic shape of the bridge, but it makes the bridge more vivid. I believe that this is a better way to record the bridge compared with using a fisheye lens. The differences between using a traditional camera and using Sato’s camera are that the traditional camera gives viewers a bridge to their minds, while Sato’s camera gives a feeling of the bridge to their hearts.

Another reason why Sato succeeded is he follows his heart to make his idea come true. No matter the method he used or the scene he chose, he did a lot for them. In my opinion, he knows what is his life, or what the exposure of his life tells him. He was a sculptor before, but he didn’t give up his advantage in Sculptor when he became a photographer, he combined them and built up his own form of photograph. I think this is a good example for me, I should also find my own advantage to build up my project in the class. What’s more, Sato knows how to create things to help him to achieve his goals. When he has a scene in his mind, he will do something to make them out. This also encouraged me, and I know that when I have some ideas, I should not be afraid of failure, I should try my best to do it, and I believe that it is a necessary character in ITP studying, and only in this way, I can really find the value of my life.

All in all, Tokihiro Sato’s works make me think a lot, and it provides me a new way to know photograph, sculpture, and media. Meanwhile, Video Sculpture also makes me re-know the world around me. I believe through this semester’s studying, I will get a deep cognition of the exposure of my life.
Posted by Unknown at 6:52 PM No comments:

Hello, today I bring my toy car with me. As you know, I made a gesture control car this semester. First, let’s watch a short video which introduces my car to you in an interesting way.

From the video, you can see how I made it and how does it work. First, I got that idea which is to control a kind of car with Arduino and Max/Msp, using the color track, so I searched a lot information about how to communicate between Max and Arduino, and I found Maxuino, it provides me an easy way to control the Arduino board, I can just use the standard firmata in Arduino to communicate with Max. However, it causes some problems. First, maybe the complicated function of Maxuino, it makes the communication unstable. Sometimes it works well, but sometimes I didn’t change anything, it didn’t work. Another problem is that I tried some methods to use Bluetooth module to make the communication wireless, but I failed each time. So I finally changed my mind, and I decide to use another way to communicate between Arduino and Max which is what I am using now.

Here are the Max patch, Processing code and Arduino code. The max patch is basically divided into four parts. The first one is jit.pwindow. It takes a Jitter matrix and displays the numerical values as a visual image in a window. And then is the jit.qt.grab. The jit.qt.grab object permits one to digitalize video from any Quick Time-compatible video digitizer, and decompress the signal into a Jitter matrix. It also offers a grab-to-disk mode. The jit.findbounds object scans a matrix for values in the range [min, max] and sends out the minimum and maximum points that contain values in the range [min, max]. The mxj object is to send the data to Processing program.

This is the screenshot of my processing code. The first thing I would like to say is about how to get the data from Max. I imported two libraries, one is processing.serial which is used to open a serial port for processing. While, maxlink is a library that allows processing to get data from Max.

So now I can get the data of my movement in front of the camera in Processing.

The next step is to send them to the Arduino Board. I use serial.read to get the data from Processing.

So far, I have already completed the basic design of my car.

Combined with the simple UI design, let me talk about how to control the toy car. Now I just use two simple color objects, one is red, one is green to simulate the basic gesture control. I use the red one to control the speed of the car, and use the green one to control the car’s direction. At the beginning, I use both of them in a horizon control, but suddenly I found that based on people’s real life, they prefer to use a vertical control as the speed control.

Here is a general timeline of developing this kind of car. Most of them have already done. Such as the testing, we need to test what we want to use in our project before we start to assemble our project. And then we could decide what to use, or what not to use. In my project, I spend more time on Assembling and Programming. First, it’s difficult to make a car like this because it’s difficult for me to find materials. Besides, the front wheels which are used to control the direction is also difficult to build. I tried many ways and finally I make it like this. In terms of the back wheels, first time I used a gear box to change the direction and the speed of the dc motor, but I found that it couldn’t drive the car because of its weight. So I made another change and use the dc motor directly to drive the wheels. But sometimes, because the digital output can only provide 5 volts voltage, it works still not well. So I added extra batteries here to drive it well. Programming, the most difficulties came from that sending data from processing and arduino, it often had error and almost made me crazy. Finally, with the help of Aditha, I fixed all the errors. Now it’s still a prototype and I still have a lot of things to do.

Now is the Materials and the cost of them.

Posted by Unknown at 9:44 AM No comments: 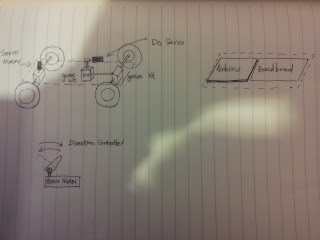 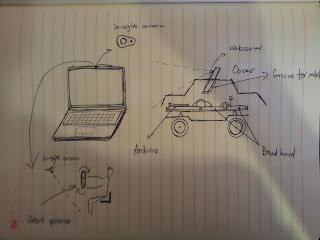 Posted by Unknown at 7:23 AM No comments: